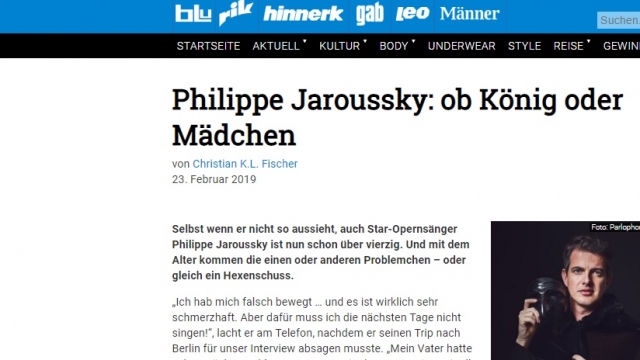 ” … What a life I had! I was able to travel the world, never had money problems, had the chance to meet all these musicians. Plus, I had a lot of time for my friends. What a privilege! And I am allowed to sleep in!”

Even if he doesn’t look like it, star opera singer Philippe Jaroussky is already past forty. And with age, some small problems occasionally appear – or just a lumbago.

“It was just a wrong move, … and it is really very painful. But at least, for the next few days, I don’t have to sing!” he says, laughing on the phone after having to cancel his trip to Berlin for our interview.
“My father already had back problems … something like that happens to me every two years. I really need to start doing sports – but I’m so lazy.” There, however, he is greatly exaggerating. After all, Philippe is one of the most sought-after countertenors, and on top of engagements at the major opera houses world-wide, and regular releases, two years ago, he founded his own academy.

So, turning forty wasn’t a big deal at all? “That birthday is a big mark for everyone. But it was also a good moment for me to see what I have done so far, and what I still want to do. However, I confess, if I was going to die tomorrow, … What a life I had! I was able to travel the world, never had money problems, had the chance to meet all these musicians. Plus, I had a lot of time for my friends. What a privilege! And I am allowed to sleep in!” he concludes, laughing again. He isn’t even worried about his voice.

“When I was twenty, my voice was very flexible. When I listen to old recordings of mine, I know that I cannot do this anymore. In exchange, I now have awareness of melody and words. My voice might have lost quickness, but it became stronger and more expressive. And if I lost it tomorrow, I still could become a teacher.”

Which is one thing he seems to prepare for with his Académie Musicale Philippe Jaroussky. “I love the idea of accompanying people for a year, giving them opportunities and enabling them to start making friends. If I’m allowed to dream, then I want the Académie to survive me.” Even with his latest recordings, it seems he wants to teach the world, because while well-known composers and pieces are being recorded again and again, Philippe now dedicates his last project, “Ombra mai fu” to the Baroque master Cavalli.

“During the last five to ten years, there has been a revival of his music, because the dramatic potential of his music was finally being recognized. Most of his arias are barely five minutes long; it’s a style full of surprises. And his music if full of freedom.“

And then, there is something else that Philippe loves about his profession: the wonderful, opulent garments that are part of his performances. “I like dressing up! Above all, I’m a musician and have never been a born actor. Whether I’m a king or a girl on stage, the costume helps me a lot. We rehearse for weeks without the proper costumes. You sing in what you happen to be wearing, so it’s hard to get into character. But when the make-up and the costumes are there, … Now I can be different; now I can be crazy!”