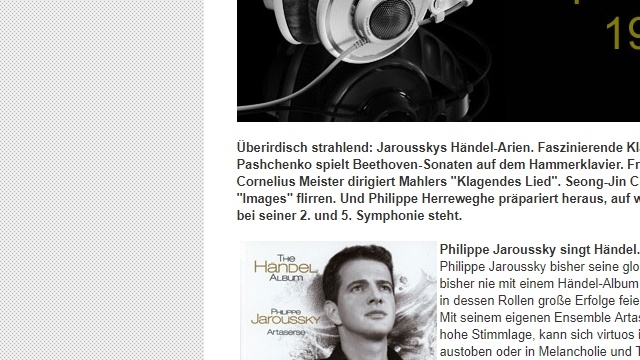 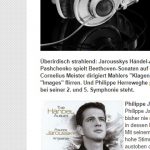 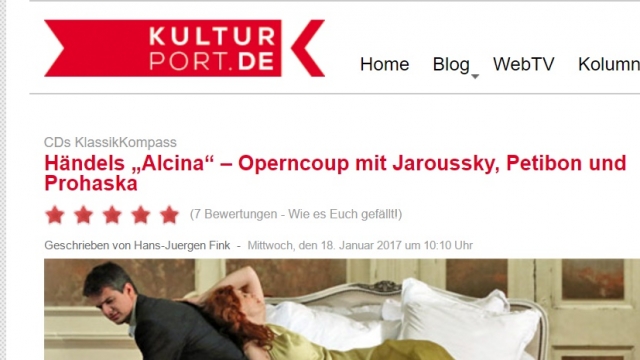 Disclaimer: This is a fan translation; no infringement of copyright is intended. We believe the publication of this translation fulfills the requirements for “Fair Use,” for discussion and study.

Händel’s “Alcina” – An Operatic Coup With Jaroussky, Petibon And Prohaska

With sorcery and love, the sorceress Alcina is fighting a desperate battle against the horrors of old age. For his Baroque opera, Händel set this psychological drama to ravishing music; for Aix-en-Provence 2015, director Katie Mitchell envisioned a sombre, disturbing, but also surprising and amusing imagery. The cast: a feast for the ears and eyes.

Recently, at the beginning of November, Philippe Jaroussky was at the Hamburger Laeiszhalle. Joined by the Freiburger Barockorchester, he performed for the concert series “Das Alte Werk” hosted by the NDR, with a programme comprising the repertoire on his latest CD, “Sacred Cantatas,” featuring four cantatas by Johann Sebastian Bach and Georg Philipp Telemann – where obviously he was minutely more at home with Telemann, a composer field-tested in opera, than with the very introvert music of the cantor at the Thomaskirche. On record though, you can savour Jaroussky’s angel voice at its absolute best, at both composer’s works.

Before the concert in November, the man with the clear, assertive voice had already sung the season opening of the NDR Elbphilharmonie Orchester – last early September at the Laeiszhalle; still a future project then: his participation at both the inauguration concerts of the Elbphilharmonie, where at the 11th and 12th of January, he sang renaissance madrigals from one of the balconies, accompanied by a harp.

In May, he returns once more to the spectacular new building at the harbour: he will be giving three early summer concerts with the NDR Elbphilharmonie Orchester and Thomas Hengelbrock, were he is going to lend his very own, unusual and unique sound to the song cycle “Les nuits d’été” by Hector Berlioz, originally written for low tenor or mezzosoprano.

The frequency with which Jaroussky is popping by in Hamburg doesn’t need to come as a surprise for anyone – after all, the countertenor superstar is artist in residence of the NDR Orchester during the season 2016/2017.

Baroque opera at its finest: Händel’s “Alcina” with Jaroussky

Who didn’t manage to get hold of tickets for any of the performances can draw some comfort from the CD “Sacred Cantatas,” and from the really magnificent opera on DVD or BluRay: Händel’s great Baroque “Alcina,” premiered in 1745 in London. Recorded in 2015 at the Festival in Aix-en-Provence. A recording of the ingenious production by Katie Mitchell, who stages an interpretation of “Alcina” where not a single one of the 187 minutes and not one of the many arias is even a tiny bit boring.

The story around the aging sorceress Alcina and her sister Morgana becomes a fascinating game between illusion (the youthful appearances of the two, Patricia Petibon and Anna Prohaska in the parlour), and reality, when their alter egos are played by older actresses once they are leaving the parlour at the centre of the dollhouse via the side doors, heading for their magic laboratories.

The two capture young men, who after some time, once love has cooled down, are ending up in showcases as taxidermy specimens. Naturally, the young knight Ruggiero (Philippe Jaroussky) is an ideal victim – if it wasn’t for his lover, who seeks him out and, dressed as a man, tries to free him. Pure drama in the sultry parlour of love of Alcina’s, with the passionate acting of Petibon’s and Prohaska’s adding compelling allure (with a hint of “Fifty Shades Of Grey.”)

Concerning playfulness and vitality, the young Alcina definitely surpasses Ruggiero’s lover. Not even remotely everything is acted out; cleverly, Katie Mitchell leaves many things to Händel’s incomparably touching music and the facial expressions of her actors. Devastatingly acted: Alcina’s break-down, when she realizes her magic is waning and Ruggiero is eluding her.

The orchestra in Aix – just like at the Bach/Telemann concert in Hamburg – was the Freiburger Barockorchester (with the Russian choir MusicAeterna.) Both are able to maintain the electrifying tension of the plot over the full distance, at every second. Conductor is the Italian Baroque specialist Andrea Marcon. A feast for the senses. Jaroussky sings pure drama – seductive, with effortless radiance, he elegantly musters the dazzling coloraturas. Definitely worth hearing and seeing are the two sisters/sorceresses as well as Kristina Bradic as Bradamante with her sensual mezzo. Special praise, however, goes to boy soprano Elias Mädler as Oberto. Mädler’s absolutely secure, thoughtful interpretation astonishes every listener.

An intelligent, musically captivating recording that has everything that comprises the magic of a Baroque opera like “Alcina.” 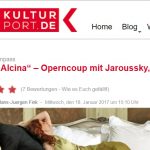