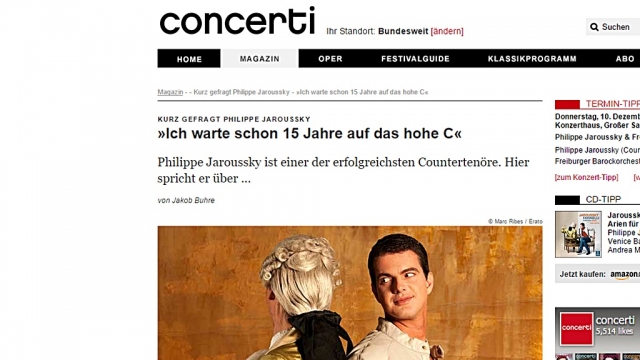 Disclaimer: This isn’t a professional translation. We believe that the publication fulfills the criteria of “fair use,” discussion and study. No infringement of copyright is intended.

Philippe Jaroussky is one of the most successful countertenors. Here he talks about …

Sense of humour is becoming more and more important for me. In many concerts with Christina Pluhar and her ensemble Les Arpeggiata, I have learned that a Classical concert on one hand has to be serious, but on the otherhand that sometimes you can offer something different. At the end of the concert, for example, we turned “Ohimè ch’io cado” by Monteverdi into a kind of jazz version; I danced to it a bit. This creates a different relationship between the artist and the audience . Moreover, in opera , in the libretti, there are incredibly funny things as well. Humour is a part of life , and music should show everything, not just suffering and love.

I know it by the silence, by the high concentration during the entire concert. In France and Spain, people often applaud or call already after the first aria; this almost never happens in Germany. In return, people can be all the more enthusiastic at the end, then they are telling you whether they liked it or not. I remember my first appearance in Germany; I initially thought people didn’t like it – until I heard the final applause.

The two-lined B flat (b flat ‘’). I wish I would manage the C – but that’s probably my fate : I’ve been waiting for 15 years for the C already , but in the meantime I think it is time to see it will not come anymore (laughs ) . Of course I’m always working on my entire vocal range, not only on the high segment. [At a loss for technical terms there in English, please feel free to correct me.] With this, one doesn’t only try to develop the high range to actually sing the high notes, but one works at the extremes to feel more comfortable in the normal range, to be more relaxed at the less difficult parts.

I’ve never done that; I think I would feel uncomfortable about it. Last year we performed the opera Artaserse by Leonardo Vinci, with five countertenors , and I was offered a woman’s role , but I preferred to take over one of the male parts. For me, the countertenor voice has nothing to do with portraying a woman. What’s more, I never try to imitate a woman . I chose this voice , because I can comfortably with it; it just happens to be easier for me this way than as a basso or tenor .

There was a time when I had a big urge for it, and spent days composing. However, the result was not good enough. And at some point I lacked the time as well. I am of the opinion: If you want to be a composer and want to write something good, then you have to devote your whole life to it. That’s why I have great respect for composers. It gives [me] a certain amount of frustration that nowadays I am only a performing artist, and do not create anything new myself.

I have sung a little Bach when I was younger, but not anymore at all in the recent years. He is one of the composers that I have plans to work on in the future, but at the earliest in two years’ time. First I would like to improve my German. And then … You know, I have sung the aria from St. Matthew’s Passion , “Erbarme dich, mein Gott” [Have mercy, Lord, on me], but it is dreadful: Even if I give it my best, I’m having the feeling that one doesn’t do the perfection of this composition justice.

It still happens that people are surprised, or react negatively. I try to focus them, sometimes I look at them directly. But you cannot convince everyone. There are always people who are attending a concert because someone invited them. And if someone like this doesn’t like your singing, there is nothing you can do about it. But actually this is what I like about this register. There are many fans of it, but just as many people who think countertenors are a fake, an imitation. And I respect that attitude as well;, it’s a very personal matter, after all, whether you like a voice or not. 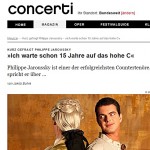