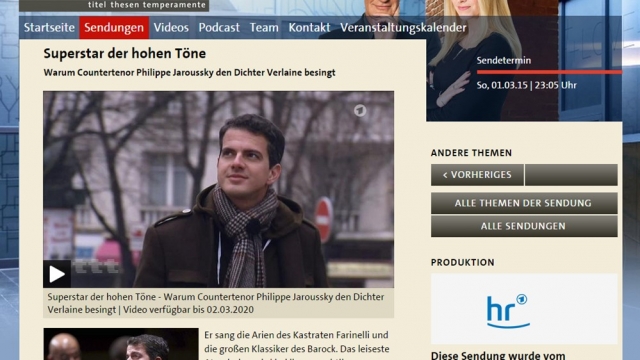 Superstar of the High Notes

Why countertenor Philippe Jaroussky sings the praise of the poet Verlaine

He has sung the arias written for the castrato Farinelli as well as the big classics of Baroque. The most silent breath turns subtle creation with him: Philippe Jaroussky is the best countertenor of the present – at least, that’s the judgement of many critics of this rare discipline, for years now. Philippe Jaroussky, a Frenchman of 38 [sic! – he is 37 in fact] years with the looks of a seductive angel – vocally masterful, and effortlessly virtuosic.

Jaroussky’s repertoire spans exceptionally wide: from the emphasis on Baroque up to contemporary opera. For his new album, “Green,” he went back to the 19th century, and immersed himself in the life of the poet whose poems were set to music more often than anyone else’s in France: the scandalous genius Paul Verlaine, iconic figure of the Bohème, protagonist of scandalous stories full of violence, sex, and passions, who the French are as familiar with – which includes his adventurous biography – as the Germans are with Goethe, Schiller, or Heine.

“ttt” met Philippe Jaroussky in Paris. Starting at the 4th of May, he is going to tour Germany and Europe. We asked him why we should still be interested in Verlaine today.

Philippe Jaroussky: His voice is inspired by beauty. As if it was fallen out of time. In Paris, in this winter, it is almost unreal. Mostly, he sings sacral music and often, Baroque opera, the classical domain of a countertenor. Now, for once, he wanted to do something completely different.

Philippe Jaroussky: “That was my ‘secret garden,’ maybe that’s surprising for a countertenor.”

In this garden, poems flourish. Jaroussky sings them. Poems by Paul Verlaine, the scandalous poet of the French. He lived at the end of the 19th century. Verlaine was a genius, violent, bisexual, and Arthur Rimbaud’s lover. A movie with Leonardo di Caprio as Rimbaud [translator’s note: and David Thewlis as Verlaine!] even centered on their relationship. The love of a lifetime, also for Jaroussky. The dead poet’s sound, he put together now on two CDs; 43 pieces of music, from various composers.

For eight years, Philippe Jaroussky has been searching to trace a wide variety of different settings to music of the poems in question throughout musical history. Why bother?

Philippe Jaroussky: “He represented a certain kind of French free spirit; he was someone who made no concessions.”

A role model? Someone who tried to be, to live as he wanted. When Philippe Jaroussky was 18, he did the same. He was a violinist, but he wanted more: to sing! Sopranissimo!

Philippe Jaroussky: “For me, it’s difficult to explain, like cheering, a physical joy. I was fascinated by genius. I’m interested in the geniuses of the past. They never stuck to the academic – whether we are talking about Verlaine or Mozart. As a simple singer, I wanted to engage myself with the beauty and inspiration these people exuded. They are people who were touched by grace.”

Touched by grace and besotted by alcohol. Verlaine’s favourite place to drink was Le Procope.” Here, all of them used to sit, the Bohèmiens, and drink their Absinthe, “the Green Fairy.” Jaroussky called his album Green because of the fairy, and because of love. Green is the title of a love-poem for Rimbaud. Few words tell a lot; conciseness was Verlaine’s style. For us, Jaroussky offers an exclusive sample.

“Et puis voici mon coeur qui ne bat que pour vous/ Ne le déchirez pas avec vos mains blanches.”
[Here are the fruits, the flowers, the leaves, the wands] Here my heart that beats only for your sighs.
Shatter them not with your snow-white hands,
[Let my poor gifts be pleasing to your eyes.] [Taken from http://lyricstranslate.com/en/green-paul-verlaine-green.html#ixzz3TBuShGzN ]

By the way, Jaroussky didn’t have a drink. Discipline leads to success. And to such a conceptual album. Jaroussky knows up to eight different interpretations of a single poem. Each of them feels different, he says.

In their fullness, the poems are sometimes bulky, but they are beautiful in the selection. Furthermore: They allow ourselves to drop a bit out of time. In Paris, and elsewhere, this winter.