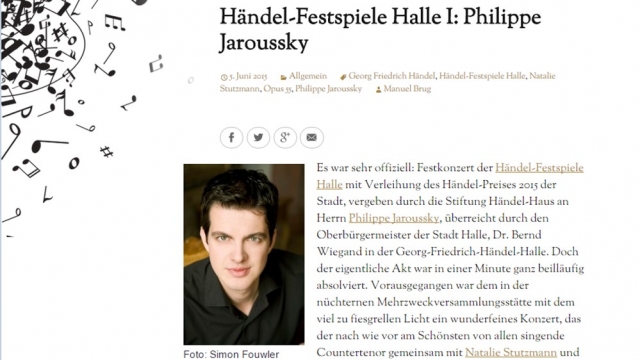 It was very formal: a gala concert of the Handel Festival Halle with the awarding of the Händel-Preis 2015 of the city, by the Händel-Haus foundation to Mr Philippe Jaroussky, presented by the mayor of Halle, Dr. Bernd Wiegand, at the Georg Friedrich Händel Hall. However, the actual award ceremony was completed within a mere minute. It was preceded by an exquisite concert by the still superior countertenor and Nathalie Stutzmann [translator’s note: corrected], together with her orchestra Orfeo 55, at the very same prosaic multi-purpose venue with the obnoxiously harsh light.

Together: that means a lot in this case. Because the still very capable [translator’s note: “hochmögend,” literally “wanting-high” indicates capability as well, because of the word “Vermögen” – capability – hidden in it.] alto didn’t merely conduct; she also sang with a tremendous expressiveness even in the short parts spanning to the darkest olive-coloured chest notes, a recitativo of Polifemo in the serenata “Aci, Galatea e Polifemo” as well as the accompagnato of sleep, which follows an aria of Teseo’s in “Arianna in Creta”; she conducted her impressively beautifully-sounding ensemble with economic and honest gesture – and she held a short, personal laudatory speech for the awardee, that was accompanied by much laughter; not without bringing the evening to a superb closure with the duet of Sesto and Cornelia from “Giulio Cesare in Egitto,” where the extremely contrasting timbres, one soaring and aloft, the other melancholic and dark, blended beautifully.

This was preceded by a program that had already been performed in Istanbul and at Cecilia Bartoli’s Salzburg Whitsun Festival [translator’s note: corrected; I think it should be Whitsun festival, not Easter], which smoothly blended rather seldomly-heard arias by Handel with movements from concerti grossi. Thus, uninterrupted by applause, two halves were possible that illustrated the variety of Handel the melodist once more, in the most delicious and contrasting way, vocally as well as instrumentally. This showcased furthermore the qualities of the ensemble Orfeo 55, [translator’s note: corrected] founded by Stutzmann in 2009: the casual and still precise way of playing together, the soft, never exaggerated, and at the same time agile sound. Moreover, they comprised smartly chosen, sometimes lyrical, sometimes happily excited, seldomly heroic arias from characters like Apollo, Orfeo, Odysseus and as mentioned before, Acis and Teseus, in a chronologically wide-spanning selection even including the serenata “Parnasso in festa” and Handel’s last opera “Deidamia” as well as, at the encores, “The Choice of Hercules” and “Teseo.”

Jaroussky – in splendid vocal shape, at the centre of attention at all times, yet remaining modest – sang with bright, never sharp, beautifully veneered timbre, with exemplary vocal technique, most of all though with his very own puristic soulfulness which nonetheless breathed sensuality. Especially at the lyrical moments, in instrumental other-worldliness which nonetheless always remains theatrically precise, he is still unique and incomparable. There is no way in which a festival that, this year, is focussing on “Handel and his interpreters/performers” – having begun already on the 30th of May, but only getting in full swing from one highlight to the next this weekend – could have started better, also regarding its international relevance. 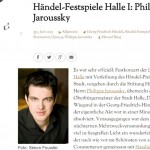