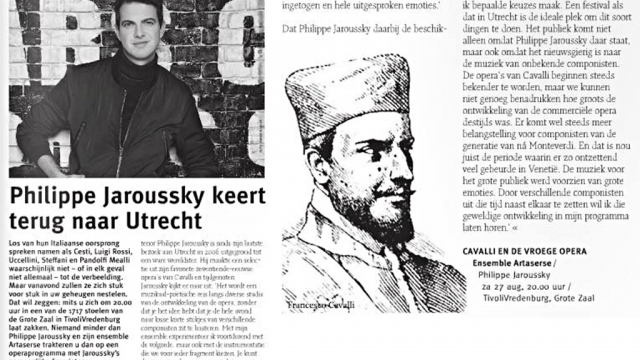 by TheGrumpyAdmin
with no comment
by countryby languageby source typeby typeby workconcert announcementdutchinterviewmagazinemonteverdi and contemporariesnetherlandstranslated into english
* This is a fan translation; no infringement of copyright is intended, no profit is being made. *
2016-08-27, article in the online festival paper for the concert at the TivoliVredenburg in Utrecht, translation by RvO
Philippe Jaroussky returns to Utrecht
Apart from their Italian origin, names such as Cesti, Luigi Rossi, Uccellini, Steffani and Pandolfi Mealli, probably do not, or at least not quite, live up to the imagination. However, tonight, they will nest in your memory. That is, if you seat yourself in one of the 1717 chairs of the Grote Zaal, at 8 pm, at the TivoliVredenburg. None other than Philippe Jaroussky and his ensemble Artaserse will treat you to an opera program with Jaroussky’s personal favorites.
In a festival dedicated to Venice, the birthplace of commercial opera, the genre of course can not be overlooked. Since his last visit to Utrecht in 2006, Countertenor Philippe Jaroussky has become a true international star. He made a selection of his favorite 17th century operas of Cavalli and contemporaries. Jaroussky is looking forward to it:
“It is a musical-poetic journey through various stages of the development of the opera, without the feeling that you are listening the entire night to loose short pieces by different composers. With my ensemble I constantly experiment with the order, but also with the instrumentation that we choose for each fragment. 17th century music is so beautiful to colorize: here a theorbo, there a Baroque guitar, then a harpsichord. And we provide good dynamics, with enough variety: between slow and fast, between virtuoso and intimate, between understated and outspoken emotions.”
That Philippe Jaroussky owns his own instrumental ensemble also helps.
“These are people with whom I have been working for years, who understand why I make certain choices. A festival like this in Utrecht is the ideal place for this kind of thing to do. The public doesn’t only come to see Philippe Jaroussky, but also because it’s curious about the music by unknown composers. The operas of Cavalli start to become better known, but we can not emphasize enough how big the development of commercial opera was at the time. There is more and more interest in composers of the generation from after Monteverdi. And that is precisely the period in which there was a lot happening in Venice. The music for the general public provided big emotions. By putting different composers from that period next to each other, I would like to show this great development in my program.” 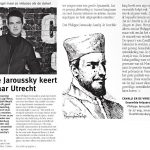