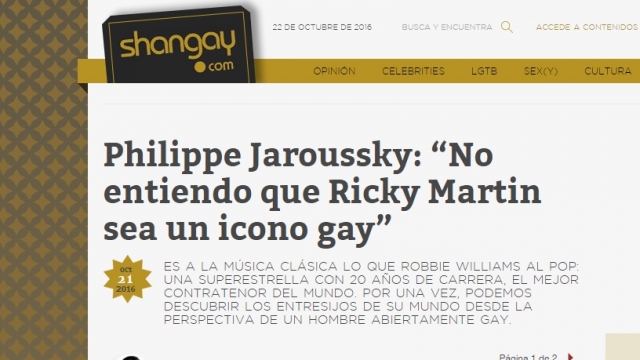 This is a fan translation; no infringement of copyright is intended. We believe it to within the realm of “fair use,” for discussion and study.
Translation by Lankin (and with thanks to TV for the help!)

Philippe Jaroussky: “I don’t understand how Ricky Martin could become a gay icon.”

He is to Classical what Robbie Williams is to Pop: a superstar with a 20 year career, the best countertenor in the world. For once, we can discover the secrets of his world from the perspective of an openly gay man.

His is a prodigious career. His talent is unreachable, one of the most admired countertenors in the world, constantly facing new challenges – the most recent, his album “Sacred Cantatas,” is his first recording in German, comprising works by Bach and Telemann.

Philippe Jaroussky briefly passes through Spain on October 21st, 22nd and 23rd to perform “Les nuits d’été” by Berlioz, and will return to the Auditorio Nacional in Madrid on November 12th to perform his new album live with the Freiburg Baroque Orchestra. Already in 2018, he will return to the Royal Theatre, with “Only the Sound Remains,” composed for him by the Finnish composer Kaija Saariaho.

Just like with the big stars of Pop, it is difficult to get an interview with the Frenchman Jaroussky. He has a tight schedule for months in advance. Luckily, he made it possible to find time to talk to us.

Never before has he spoken to the Spanish gay media, and he knows that his experience in the world of classical music is a point of interest, just because there aren’t many openly gay performers of classical music with an impact like his. (He answered our questions, by the way, in almost flawless Castilian.)

SHANGAY ⇒ What is the main difference between you and a pop singer?

Philippe Jaroussky ⇒ A pop singer works a lot on their image; you have to create a character– it’s an important part of a pop singer’s art. We, on the other hand, don’t create our own music; we sing works by different composers, but we can change our repertoire every week. While pop singers use to sing the same songs for one or two years, and their hits during their entire career, an opera singer has to work hard to continuously memorize a variety of music.

SHANGAY ⇒ Are you aware that your fate changed the day you decided to sing as a countertenor?

Philippe Jaroussky ⇒ Yes. It might seem strange if you don’t know this kind of voice, for me, however, it was the most natural. For cultural reasons, we are led to believe that a man should sing low, with his chest voice, and a woman should sing with a higher voice. Right at the moment, we countertenors are so successful because society has evolved, and has changed the general perception of gender. The countertenor voice is a great example for how a man can have a more complex sensitivity, different from the traditional image. And I am not talking about sexuality.

“Everyone just assumes it was eccentricity. And that wasn’t easy for me.”

SHANGAY ⇒ Countertenor voices are associated with the castrati, artists of ambiguous sexuality. At any point, have you experienced prejudices or rejection regarding your style of singing?

Philippe Jaroussky ⇒ No prejudices, but some confusion, especially at the beginning of my career. It’s out there for everyone to see – the impact of the contrast between my physical appearance and my voice is evident. However, the same is true for an actor or a dancer; the sexual appeal of any performer is always there. It is a sensuality that is very Baroque, as I know well, and I have learned to play with it a lot. I am fascinated by the hedonism associated with the voice. However, I never wanted to sing like a woman, nor do I think I sound like a woman.

SHANGAY ⇒ Tell us about your experience on the TV show “Alaska y Segura” three years ago. [Translator’s note: it was last year.]

Philippe Jaroussky ⇒ It was really interesting. My pianist first arrived on set and sent me a message that said “It’s full of drag queens!” [laughs]. I did the interview with several transvestites behind me, and I thought, “I have really done a very eccentric thing in my life: setting my mind to sing like a countertenor.” With singing like this, I express the freest part of my personality – nonetheless, when I started singing, I was quite shy, if you can believe it! [laughs] And I was singing on the program, dressed in really casual clothes, and it turned out to be something just as bold as the looks of the drag queens who were in the audience. Everyone just assumes it was eccentricity. And that wasn’t easy for me.”

SHANGAY ⇒ I know you like to go out on the town when your schedule allows it. Do you enjoy it?

Philippe Jaroussky ⇒ A lot. Because after I spend two hours singing in front of a group of people who were paying attention exclusively to me, when I finally get to go out, I am just another face in the crowd.

SHANGAY ⇒ It seems that there are more opera singers who are closeted than openly out. Is this correct?

Philippe Jaroussky ⇒  It’s actually the opposite. It is well known that you will find less homophobia within the world of art than in other environments. It is a lot easier to say you are gay in my world, and it is something that homophobes try to use against us sometimes. We are one big family, and we help each other. However, I know just as many gay singers as straight singers, and I think there is a revolution regarding heterosexual men who increasingly begin to embrace their feminine side without a problem.

SHANGAY ⇒ How has your experience with the gay press been so far?

Philippe Jaroussky ⇒ The first time I gave an interview to a gay magazine was in Germany. The first thing the journalist asked me was whether I was gay. I was taken aback, because the question seemed a stereotype to me. Won’t a gay magazine interview a person if they are heterosexual? At any rate, I said yes, because I have nothing to be be ashamed of. However, during the first ten years of my career, I didn’t want to talk much about the topic, just because I did not want to be pigeon-holed and have my voice end up associated with my sexuality. I didn’t do what Ricky Martin did – I find it incredible that he has evolved into a gay icon, when for more than two decades, he didn’t want to say he was gay for fear of selling fewer records.

SHANGAY ⇒ What is the worst thing about being a star of Classical music?

Philippe Jaroussky ⇒ Traveling so much and having to to talk about myself all the time. It’s crazy. The most positive aspect is that through many interviews I can defend my passion for classical music, and introduce many people to the genre who may be surprised by what they hear. Some listeners are going to have their first awakening with Stravinsky, others with Mahler or Beethoven, …

SHANGAY ⇒ Are you going to dare a pop project one day?

Philippe Jaroussky ⇒ I would love to do an album of classic French songs of the last century – Edith Piaf, Jacques Brel… After a 20 year career, I am more open to possibilities like that. I would also like to collaborate with producers on electronic music – why not?

SHANGAY ⇒ How does your boyfriend handle your constant travel?

Philippe Jaroussky ⇒ I have been together with my boyfriend for ten years now, so he takes it well. Sometimes, he is traveling with me, of course. In the past I did have some problems with previous partners, but he never gave me any trouble in that regard. However, it is true that our plans come in second after the music. Maybe I want to spend two weeks at home together with him, then a project comes up that interests me, I accept, and have to travel again. He does take it well; after all, he knows the career of a singer is not that long; the golden age of a voice is between 30 and 50, approximately, and surely, in 10 years I will have to find another place in music.

SHANGAY ⇒ What do you think about the massive demonstrations against gay marriage happening in your country?

Philippe Jaroussky ⇒ It represents a complete regression. I find it incredible that France is going to be nearly the last country in Europe that passes a gay marriage law. The country of freedom! French society is stagnant, and I’m surprised that anyone can say that these demonstrations show no signs of homophobia when that is entirely all they show. It’s awful.

The album “Sacred Cantatas” was released by Erato/Warner Classics
Philippe Jaroussky is going to perform at the Auditorio Nacional de Madrid, on October 21, 22 and 23, as well as on November 12.