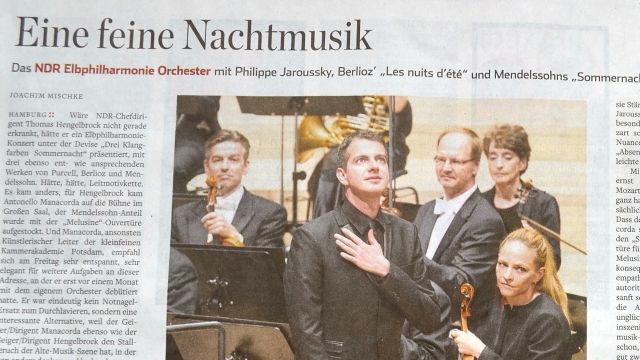 If Thomas Hengelbrock, principal conductor of the NDR, wouldn’t have had to cancel due to illness, he would have presented a concert at the Elbphilharmonie under the motto “Three Tonal Colours Of A Summer Night,” with equally fitting and appealing works by Purcell, Berlioz and Mendelssohn. Shoulda, coulda, woulda, … It was different in the end: Antonello Manacorda appeared on the stage of the large hall, the Mendelssohn part was being augmented with the “Melusina” overture. And Manacorda – otherwise artistic director of the small but exquisite Kammerakademie Potsdam, commended himself – very relaxed, very elegant – for further appointments at the Elbphilharmonie, where he debuted with his own orchestra merely a month ago. Clearly, he wasn’t just a fill-in to muddle through, but an interesting alternative, especially because the violinist/conductor Manacorda, just as the violinist/conductor Hengelbrock both share their background of the Ancient Music scene, with its different approach and concept of leadership.

Discreetness is a weakness? This time, it was a strength

At the same time, this endearing concert program was Philippe Jaroussky’s hard goodbye, whose time as artist in residence of the NDR in the first concert season of the Elbphilharmonie is ending this Sunday, as charming and convincing as it began. Berlioz’ soul-caressing song cycle with orchestra “Les nuits d’été” can be sung by different voice types; however, it wasn’t composed for a countertenor, a voice that, by default, is associated with pomp, affect, and baroque wigs, and less with salon-music-like sensitivity or the 19th century.

That was precisely the special appeal of the element that Jaroussky contributed, highlighted by his placement in the orchestra: he wasn’t flirting with his notes at the apron, neither above the brass at the end of the stage, but right in the middle, between the woodwinds section and the contrabasses – for reasons to do with the acoustics of the hall, but also for greater transparency concerning the score, to blend in as yet another timbre, one who also had to sing the poems.

Whereas with a female voice, these night-pieces usually come along somewhat light and sweet and perfumed; the unmistakable clarity of Jaroussky’s timbre gifted them with a fascinating ambiguous flair. Mancorda toned down the orchestra to the bare necessary, modelling with ease the most delicate piani, draping a tapestry of sound soft as silk around Jaroussky’s vocal lines, where nothing was submerged, nothing clumsily lost. Discreetness means weakness? Here it was a strength. In every single piece, Jaroussky managed to find the one nuance that rendered it the most sincere. A tenderly wafting portamento, or an intimate nuance. Especially during “Absence,” there was more guessing the airy and light music than actually hearing it.

In some respects, Mendelssohn is a lot like Mozart: it all seems perfectly easy, it all sounds quite harmless, but only before one is actually undergoing the attempt to play it playfully and easily. That Manacorda, an expert on Mendelssohn, chose the overture from “The Fair Melusina” as a preparation for the “Midsummer Night’s Dream” was only consistent. Both pieces call for an empathetic narrator rather than an authoritarian guide. The low and gentle, lustrous ripples, swirling around the theme of the hapless mermaid, Manacorda sets in scene in the style of a chamber music prelude.

It was easy to spot the subtle hint of what the sujet was going to evolve into about two decades later, in Wagner’s monumental, surging prelude to “The Rhinegold” (how fitting: Hengelbocks next project at the Elbphilharmonie, in three weeks, is going to be a concertante “Rhinegold.” With the same high standard, after the cheered Berlioz, the program continued with the music to “A Midsummer Night’s Dream.” Here both the conductor and the tutti displayed their security and attention to detail, clearly enjoying themselves. With a light touch, they sketched a collection of lovely atmospheric pictures, and Mancorda’s encouraging calm, in passing, seemed to free the solo horn player Claudia Strenkert from her slight nervosity at the beginning of her solo at the Notturno. It’s impossible to imagine a happier ending than the famous Wedding March for a concert that, without any ifs or buts, marks a success on the NDR’s timeline of the first months at the Elbphilharmonie.
(Image caption:) Countertenor Philippe Jaroussky at the curtain call at the large hall of the Elbphilharmonie 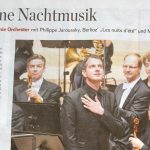