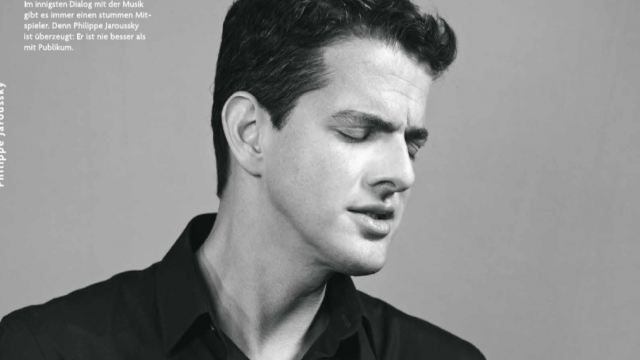 Philippe Jaroussky is at the height of his career. No countertenor is more popular; even the critics love him. He himself steers the interview towards the most important question: Where is he headed for – and what remains?

You’re moving many people very intensely with your singing. Can you actually see that during the concert?
Philippe Jaroussky: Yes, I perceive the people in the audience. By the way, that’s an acquired skill for a musician, especially for a singer. You have to really face the people, yet stay within your own center at the same time, and fill the distance to your counterpart. And you mustn’t be afraid of funny faces! Some people really make strange faces, seem critical or distanced, but it’s not as if that means “They don’t like me.” People just look strange at times when they are concentrated or, as you said, touched.

If someone coughs, you cast them a stern look. Is the audience helping or do you wish at times it would just vanish into thin air?
Generally speaking, the audience improves an interpretation. That’s why music is always better in concert than it is on CD. With every new program, I try to do two or three concerts at the least before I take it to the recording studio. Only then you know if something you do has the desired effect and you can interpret accordingly in the recording.

The Festspielhaus Baden-Baden is a huge hall. Isn’t it actually too large for your music?
Well I have been to Baden-Baden multiple times. The first time really was a bit eerie. The hall has great acoustics, but its dimensions are a challenge. You need to be in peak form. If I woke up with maybe 60 percent of my voice in the morning, I wouldn’t sing there that night. A large hall has certain advantages, but you have to be conscious of it while you perform.

How do you handle?
It helps to take two steps back, away from the edge of the apron. It makes the hall appear not quite as large, and that way, the sound reaches people seated at the front sides better. Half a meter makes a huge difference there. It also changes your perspective, and the atmosphere. In 2012, at the concert with baroque arias and duets – together with Marie-Nicole Lemieux – it was fantastic. We were singing everything by heart and were acting a lot, creating an intimacy on stage.

Your next program is going to entirely comprise Händel arias.
It doesn’t sound very original to begin with, because Händel is most countertenors’ favorite pick concerning their repertoire. However, I didn’t choose the famous arias, not from “Giulio Cesare,” “Rinaldo,” “Agrippina,” or “Alcina.” Instead, I picked some arias that are lesser known but that I like a lot. There is “Flavio,” “Siroe,” “Tolomeo,” and “Radamisto” – the latter is more famous, but I picked lesser known arias there as well. If a composer is a genius, their genius is showing everywhere. In the most famous Händel operas there are ten to fifteen arias that are all fantastic – “Giulio Cesare” alone has at least twelve popular arias. Other operas may have three or four instead of ten astonishing arias. To discover these is very worthwhile.

About the author: Jutta von Campenhausen is a biologist and scientific journalist. As a child, she sang in the Hannover Girls’ Choir and was playing the violin as well as the piano. Nowadays, she plays the viola in a Hamburg amateur orchestra and is particularly happy when she gets the opportunity to write about music.

Handel composed 42 operas with hundreds of arias. How did you choose?
I focused on musical quality, not artistry. The arias I chose in the end all happen within the tessitura where I can do the most with my voice. I wanted to feel secure throughout the range so I can focus on musical quality entirely. That’s something new for me after the past years.

Don’t your repertoire picks always suit your voice?
Some programs have been demanding. I don’t like to feel overtaxed concerning my vocal means; I prefer to sing what feels comfortable for myself. I like to have the feeling that I’m well prepared and have given the best of myself – that’s what the audience deserves.

How do you prepare?
I need time to achieve the best I’m capable of. If you have to sing Fiordiligi in “Così fan tutte” for the first time, you won’t start practicing a week before the concert either. I like to take my time to diligently prepare the repertoire. What I appreciate about the Händel program: I’ve been working on it for long, then polished it in fourteen concerts; now I give it some rest. By the time I’ll pick it up again for Baden-Baden, I’m going to have a certain distance, and it is going to be pure joy in making music.

When you practise, what do you work on?
During the last ten years, I’ve been working hard to get the sound as harmonious and free as possible. Nowadays, I’m much more comfortable when I sing than five years ago. There are countertenors who have bigger voices. However, my voice suffices to fill a hall. I’ve become more relaxed in that respect – and the voice sounds better when you’re relaxed. If you want to shine in some phrases, you have to do them one-hundred, two-hundred times at the rehearsal room to be calm on stage. That’s hard. And that’s why singing is so interesting for me as well – you learn a lot about yourself. You get to know yourself. What you can do and what you cannot.

[Caption:] In the most intimate dialogue with the music, there is always a silent player. Philippe Jaroussky is convinced: He is never better than with an audience.

You learned the violin as well. Do you still play?
A little. I have a love-hate relationship to the violin. I am always going to remain a violinist; I’ve learned a lot on the violin. At the same time, however, the instrument gives me the feeling to have failed. I didn’t reach my goal; it has always been frustrating. They kept telling me: you are a good musician, but a bad technician.

Now you are planning to set up an academy for young musicians.
Yes! The Académie Jaroussky opens with the start of this season on the outskirts of Paris. I have been doing my job for 20 years now, and there are plenty of people who support me. The chances that I had, the possibilities people offered me, that’s what I want to return. I am convinced that now, at the height of my career, it is when I can do that best, pass it on to young talents. However, the Académie isn’t only a project that is going to run for a year. Maybe it even outlives me – it is the greatest project of my life.

How is the Académie going to work?
The Académie has two main focuses: We work with children from seven to twelve from backgrounds that don’t have any real contact with classical music. We’re covering everything: instrument, lessons and we offer our experience. The other branch is more traditional: There are master classes for young talents from 18 to 25. I am going to spend days listening to others, to feel their energy, their personalities.

What makes you excited about giving lessons?
Teaching is very interesting for me. It’s also very rewarding for me. In others, you perceive more clearly what is beneficial and what isn’t. On top of it, it’s exciting to accompany young singers. I have been giving master classes in the past. With one working phase, they are a nice experience for the student, but they are going to forget. About 80 percent of what you try to convey doesn’t stick. That’s why at the academy, we’ll have three appointments a year, and we’ll be spending a week with each other – and that’s great. It’s not only going to be about vocal technique, but also to find out what the students really want to do. Finding out what repertoire suits them best. It’s about supporting musicians at the beginning of their careers, just as I have been supported. It’s a great responsibility and a privilege.