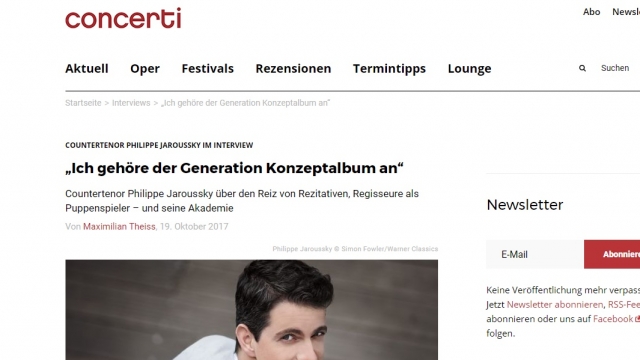 “I belong to the Generation Concept Album”

Countertenor Philippe Jaroussky about the allure of recitatives, directors as puppeteers  – and his academy

Even if in his late 30’s, Philippe Jaroussky is most likely closer to the start of his career than the end of it, a glance at his discography reveals a plethora of recordings. This considered, it was wonderfully fitting to conduct this interview on the premises of his record label.

Mr. Jaroussky, the number of your CD releases is just as impressive as their musical range. Is it a countertenor’s destiny, to re-discover and showcase his voice again and again?

Philippe Jaroussky: I keep saying that nothing was written for countertenor voices – not even Baroque music. Of course, that’s deliberately provocative, but what I’m trying to express is that every countertenor has the opportunity to choose the repertoire he is comfortable with for himself.

Does that mean that musical self-discovery was important for you?

Jaroussky: Sure! To sing a wide range of repertoire, for instance, helped me to discover new colours in my voice. When I was on the look-out for new repertoire, my personal taste in music often wasn’t the deciding factor, but whether I, as a performer, can find a musical approach to the piece. Next year I’m turning forty, and looking back, I think it was the right thing to do, to record such a multitude of CDs. Sometimes, I’m asking myself whether it’s too many, but right at the same time I get another idea for another project yet.

Whereas on your CDs, unknown repertoire seems to comprise the majority of the arias, not the famous ones.

Jaroussky: I belong to a generation of singers with a faible for concept albums, I’m Generation Concept Album, if you’d like. (laughs) Unavoidably, you encounter a multitude of unknown arias in the process. On the other hand, all the famous arias are famous for a reason – they are incredibly beautiful. And I don’t want to finally sing those once I reach 60, especially as the voice keeps changing as you grow older; it can always turn out to be too late for this one aria. Maybe that’s one of the reasons why I’m recording so much.

Your latest project, just released, is an album comprising arias by Händel.

Jaroussky: Obviously, a Händel album isn’t very original. However, I’d guess that the listeners won’t be familiar with about 80 percent of the arias. There is no Giulio Cesare, no Ariodante, no Rinaldo – instead there are arias from “Flavio,””Radamisto,””Tolomeo,””Imeneo”, … famous operas, but not super-famous. I chose the arias with great care, so I didn’t choose overly large numbers for my voice, like it was the case in some former projects of mine, for example on the “Farinelli” album. With the Händel CD, I’m focusing more on the music than on virtuosity.

Is that the reason for the many recitatives on the CD?

Jaroussky: The most important criterion for me to choose the numbers by was whether they are interesting. A recitativo is a nice way to guide the listener to the aria. If you’re only filing aria after aria, a lot might get lost on the way. Händel was a master when it came to composing recitatives. Sometimes they are so expressive and full of energy that they are packing more emotion than the aria itself. Just take the gorgeous “Stille amare” from “Tolomeo,” with its absolutely crazy harmonies! I’m not saying this often, but it is the album I am the most proud of. I think that I stayed exactly within my capabilities. I used to want to venture the 20 percent beyond, and eventually, it would have affected my voice.

This year, you’ve been inaugurating your “Académie Musicale Philippe Jaroussky” in Paris – is this one thing you are telling your students there?

Jaroussky: Yes and no. It’s not my intention to teach the pupils and students there how to sing – that’s what their teachers are for. Rather I want to aid them in developing their own vision of what they really want to do, and show them a way.

How was it for you? Did someone help you find your musical path?

Jaroussky: If it hadn’t been for this one teacher in school who told my parents that I absolutely should make music, I wouldn’t have become a singer. So this person changed my life, completely. Maybe, with the “académie,” I want to return just a portion of the opportunities I have been given by this one person. There was a huge portion of luck as well. With 18 years, I started to sing, and by 20, I was singing Nerone in Monteverdi’s “Lincoronazione di Poppea, which was a little crazy.

But apparently it was worth the risk!

Jaroussky: (laughs) Still, I was too young! My mind may have been ready, however, my physical means weren’t. On the other hand, this fearlessness has played to my great advantage: I never felt held-back when I sang, completely different from when I played the violin or the piano. I have met a lot of your artists who are highly talented and musically gifted, but who struggle to jump in at the deep end. As an artist, you have to take the risk.

We haven’t talked about yet another important part of the singing profession yet: acting. Does it come naturally to you?

Jaroussky: I’m not a natural actor, and I’m quite frank about that. However, you can learn the art of acting. I’m watching intensely what my colleagues do, how they move on stage. And I understood one thing: At your rehearsal, when you work with the stage director, you’re becoming their puppet. It’s not your job to question what she or he in the director’s chair is telling you – you just do it and focus on singing.

Let’s take Cecilia Bartoli, who is incredibly versatile and flexible. A director can ask her for the exact opposite of what she has been doing just before. And she just does it! That’s definitely a thing that takes work to learn: being no more than a doll. An opera house is a giant machine, with a multitude of passionate people in all professions. It’s expensive on top of it. A bad production, concerning craft or artistry, simply isn’t an option.

And vice versa: how should a stage director treat the singers?

Jaroussky: They have to understand the singer. It’s possible that during their conception, they had a completely different type of singer in mind. So next is, to adapt their own concept to the singer who’s actually on stage. That means stage directors have to be flexible as well, not just stubbornly pursue their initial idea. For me, what makes a good stage director is to have a clear concept of what they want, but being able to compromise in adapting it, taking into account the possibilities and personalities of the singers. Singers are absolutely different.

Do you feel that as a countertenor, you have more limitations on stage than, let’s say, a soprano, because you have a different technique?

Jaroussky: Not because I’m a countertenor. But we countertenors differ a lot from each other, have different qualities and consequently, different challenges. For my part, I would never sing Giulio Cesare by Händel.

Never or not yet?

Jaroussky: Never! Neither Ariodante. I am very careful in choosing my parts. I need to feel that I can to contribute something new and uncommon to a character. I want to surprise with my role, and offer the audience something they haven’t heard like that before. After all, that’s what makes opera so exciting.