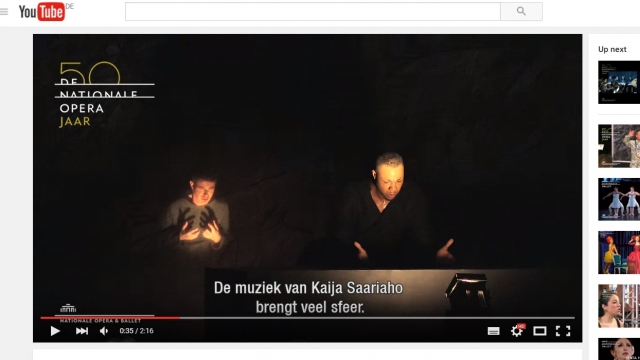 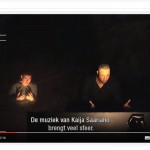 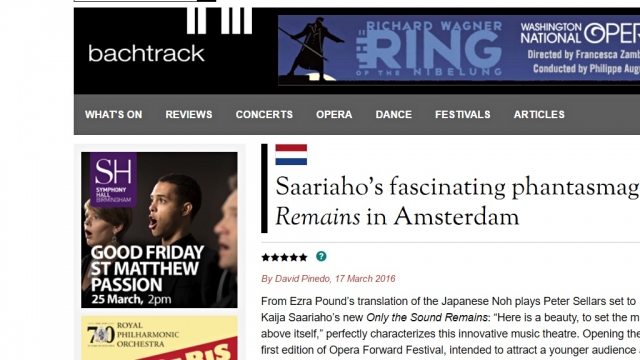 With Only The Sound Remains, Pierre Audi has succeeded at programming something spectacularly different to attract a new audience. This introspective music theatre, this future of opera, overwhelms with beauty, stimulates the imagination, and entrances the mind. Don’t miss it.

0 COMMENTS
To add a comment, please Login or register 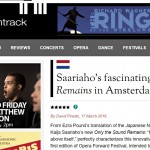 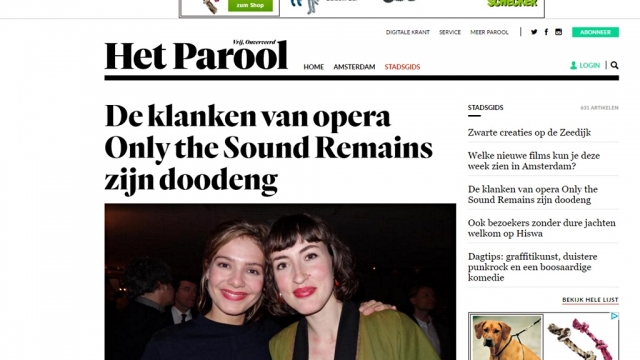 “Only The Sound Remains” begins. Well, all you hear is sounds and a desperate man is walking across the stage. A light bar appears: “Tsunemasa, full of restlessness.” Yes, that’s what I gathered from what it sounded like.
The song is being translated to the light, in two languages. I’m happy with that. Saariaho, I quickly get to realize, wants to create an ominous atmosphere and in this respect, [the production] succeeded with flying colors.
Source/Read more: [x] 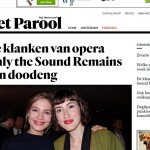 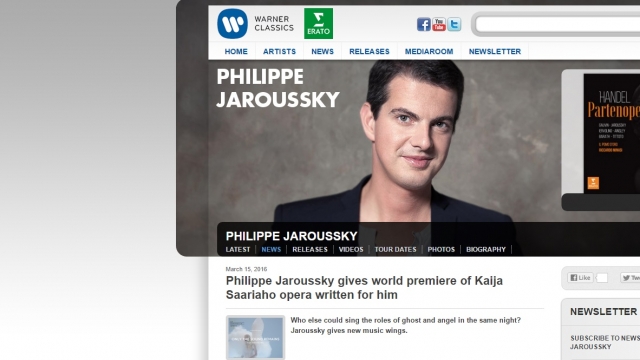 “Philippe Jaroussky sings like nobody else on the planet,” declared veteran opera director Peter Sellars last night at the Dutch National Opera, following the world premiere of his new work with Finnish composer Kaija Saariaho. 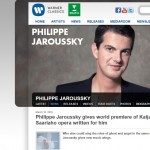 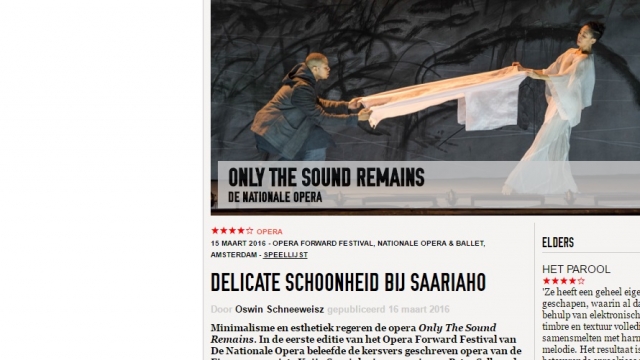 It is beautiful, but also somehow distant. Not even the heavenly voice of the world famous countertenor Philippe Jaroussky is able to change that. This detachment is the Achilles heel of Only The Sound Remains – for no matter how beautiful and impressive the production is: it stays half-way in flattery and an abundance of tension-less aesthetics. 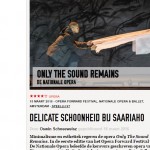 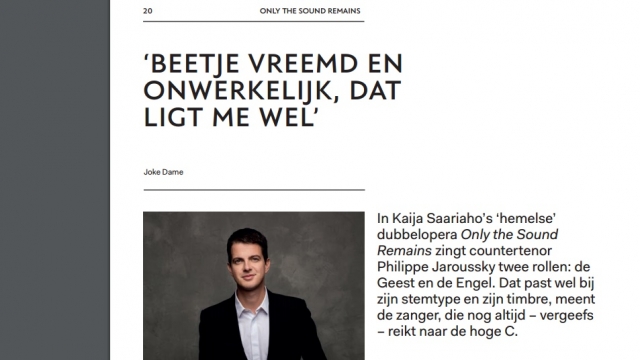 ‘A bit strange and unreal, that suits me’

In Kaija Saariaho’s ‘ heavenly ‘ double opera, countertenor Philippe Jaroussky sings in Only the Sound Remains two roles: the spirit and the angel. It fits his voice type and timbre, thinks the singer, who still – in vain – reaches for the high C.

He was not a boy soprano who in puberty didn’t wanted to lose his high voice. Philippe Jaroussky (France, 1978) never sang as a child. He played violin and piano, as a violinist loved Shostakovitch and Stravinsky, and as a pianist Debussy and Fauré, and discovered on his eighteenth suddenly his need to sing. His baritone voice, however, did not captivated him-if he sang loudly he did so with his headvoice.

“Maybe because I felt myself at home and studied violin in the high notes, I do not know … In any case not because I wanted to imitate a woman.”

His mother thought his countertenor voice was beautiful right away. Jaroussky’s father – he came from Russia [translator’s note: according to Wikipedia, his grandfather came from Russia, not his father]: “Ja Russki” (I’m Russian), as he enlisted himself at the French border – had to take some getting used to, but his parents have never stopped him. And he discovered a whole new musical world: the world of the Baroque opera, where his star could rise quickly.

I belong to the first generation high countertenor voices. We are not altos, but mezzosopranists, sopranists even. In the generations before me you saw mainly low countertenors: male altos. Nowadays my high voice type is no longer so rare. If I had to start my career now, it would definitely develop a bit more difficult.

“There will be times in the opera that I just sing and you hear something completely different than what you would expect to find in a voice. A kind of hypnotic soundworld”

That he is now in a contemporary opera on stage, he calls “fantastic” and “a refreshing experience” for a countertenor.

Jaroussky: “It’s always so frustrating that most music we sing is written for the castrato voice. That is not written on our countertenor’s body. That is why I also like working together with composers: to get the roles that are composed on my voice.”

The idea to ask Philippe Jaroussky for the latest Kaija Saariaho opera did not come from the composer herself – she didn’t know the countertenor did modern music – but by Director Peter Sellars. The French singer reacted enthusiastically to the invitation, but under subject to change.

“Look, in this kind of projects I would like to know for sure that the composer loves what I do. So I applied for an audition. She first had to hear my voice live and then I wanted to talk about what she could write for my voice and what not. And indeed, she had no idea of what was possible. It was the beginning of a very exciting adventure.”
Wrote Kaija Saariaho special notes for him? O sure, Jaroussky says. “There were whole discussions on what I could do and what not, and that was totally different from what she originally thought. She asked to reproduce some sounds and to give those different soundcolours; on that basis, she has changed a lot in the first part of the score. The second part she altogether composed with my voice in thought. In fact it went exactly so in the Baroque time: the singers asked very specific things from the composer and he was usually most willing to obey.”

The countertenor voice has, more than any other voice type, the ability to evoke the past, but also a non-realistic atmosphere.”In this piece, I am a spirit and an angel, and Kaija uses my voice to strip the supernatural opera characters of their humanity. They are a bit strange and unreal, and that’s what suits me. Initially Kaija thought of a soprano for the angel for the second story. Of course I can not really sing in the extreme soprano range. The high C is still not for me to sing.”

To make his voice even more spiritual and angelic Jaroussky’s voice will be manipulated with the computer. I think that’s amazing-Kajia just tried it out a little bit and the result of the test I found impressive.

There will be times in the opera that I just sing and you hear something completely different than what you would expect to find in a voice. A kind of hypnotic soundworld. This is completely new to me, but in the future I would like to develop myself further in this kind of projects.”

Gendercontrast.The countertenor is a temporary fashion, some people say, but Jaroussky thinks otherwise. He is convinced that the countertenor, which began a revival since its rediscovery in the 1970’s, will remain as one of the possible singing voices amongst others. “I often say: it is not because you have a high voice that people love you, it is because of how you sing.”

“It’s not necessarily femininity that comes to the fore with the countertenor, but it expresses masculinity in a different way”.

The high male voice is now widely known and the public now asks the same qualities of us as from other singers. It is good that we have developed from a rarity to something normal in the world of classical music.

Now we have to convince people that we can sing a lot more than we did in the past. Countertenors sing Rossini, Mozart, we try to come across our borders.
Because I am a counter tenor, that does not mean that I can’t sing songs with piano accompaniment. I sure can and I’m not the only one.”
But there is another reason why Jaroussky thinks the countertenor will never again disappear from the stage.

“The countertenor is a voice that undermines gender contradictions, and therefore are interesting for contemporary composers. Personally, I think a different approach to the man is important.

It’s not necessarily femininity that comes to the fore with the countertenor, but it expresses masculinity in a different way”. It shows another side of masculinity, for example a different sensitivity of the man. This contrast within the gender is also an item in Kaija’s piece: the low, earthy and more legitimate baritone is one and a half hours in dialogue with the high, heavenly countertenor. That is, apart from the story, in itself fascinating to experience. ” 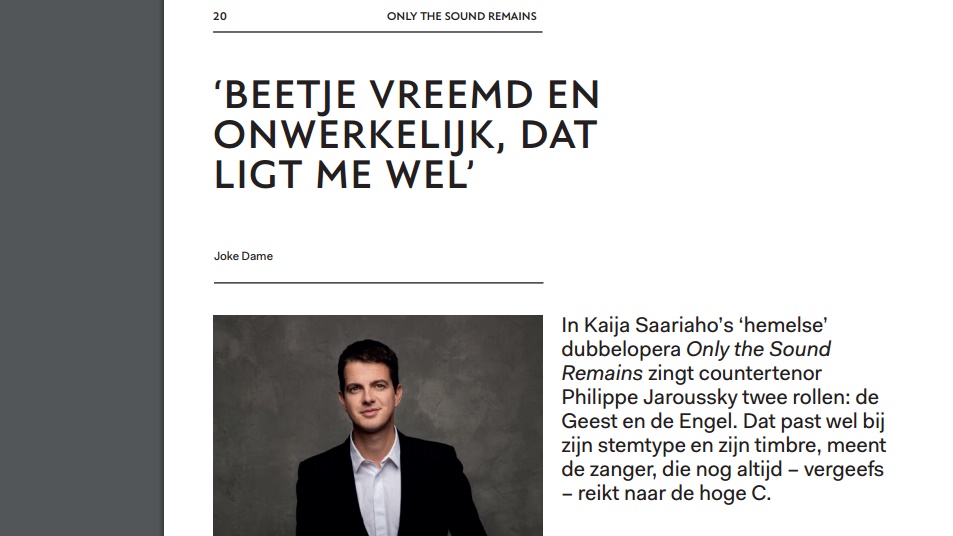 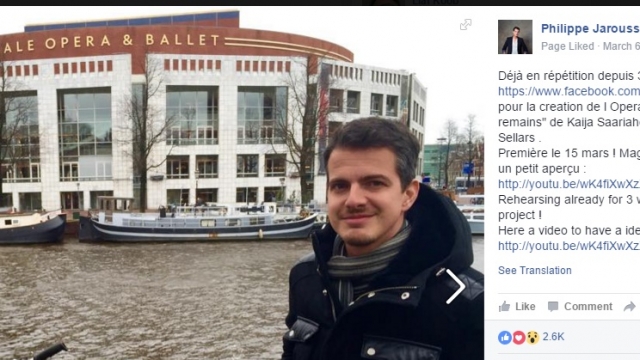 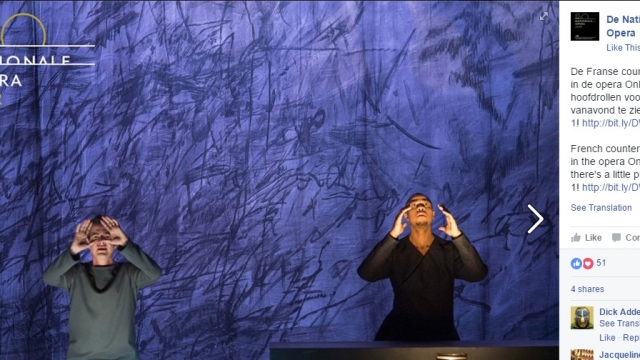 French countertenor Philippe Jaroussky is starring in the opera Only the Sound Remains. Tonight there’s a little preview on DWDD at 7 PM CET, NPO 1! http://bit.ly/DWDDjaroussky 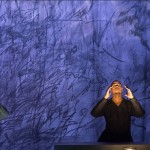 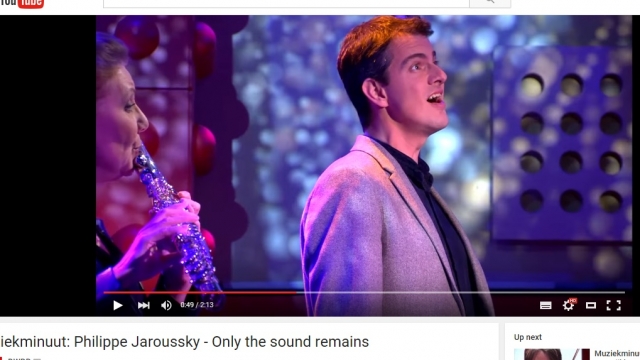 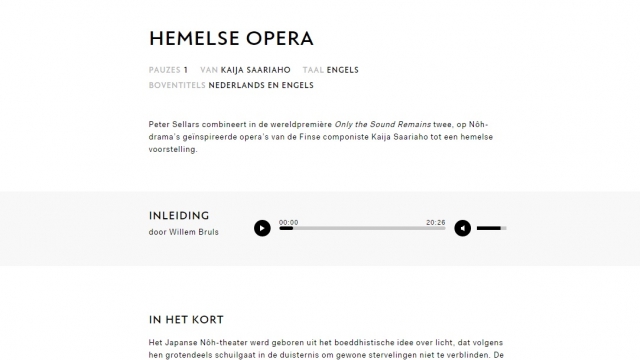